The scope and level of depth in diagnosing the structural system can vary widely.  The system’s components are frequently reviewed superficially during a general ASTM-Standard PCA walk-through of the interior and exterior of a building.  All going well, this level of review will typically identify the most obvious of deficiencies.  For example, the deflecting of a cracked structural member or significant perimeter wall settlement cracking should be discovered during this level of review. 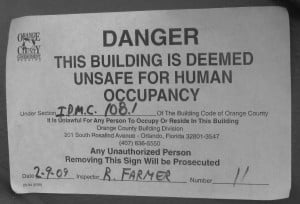 In some cases, a facility will have structural deficiencies that have already come to the attention of the local municipality.

The structural system can also be reviewed in greater depth than almost any other building system.  Complete structural calculations and 3-dimensional modeling can determine design and actual load capacities for any given member in a building.  This type of detailed analysis is most easily done if the original as-built construction drawings are available.

Typically, the scope of an evaluation falls somewhere in between those two extremes. The structural system’s components typically will have been designed with an adequate factor of safety and, with the exception of lateral load resisting design, significant deficiencies are unusual.  Also, the majority of the system’s components are concealed behind building finishes, both exterior and interior, thus in most cases in-depth observation is cost-prohibitive for the client.  The system’s horizontal components and connections can usually be investigated by accessing a ceiling or floor cavity.

Sometimes a representative number of members and connections are accessible for review to provide a sufficient indication of the system’s condition.  In some instances, destructive testing is warranted to verify structural connections.  The appropriate level of investigation can be dictated by the age and complexity of facility, geographic region, and the specific interests of the client.